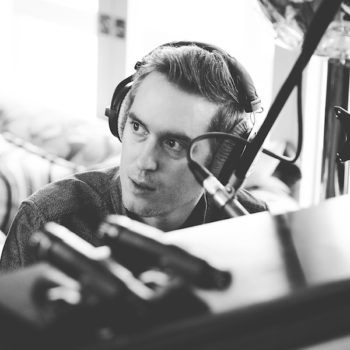 Patrick is an Emmy nominated film composer known for combining orchestral and electronic music, and creating bespoke sound palettes.
Based in London UK, Patrick is originally from Sweden and Poland, and grew up in various parts of the world spending most of his childhood living in Malaysia. He is a graduate of Berklee College of Music in Boston and was selected to attend the Berlinale Talent Campus in 2009. Patrick has always been fascinated by the creation and transformation of unique sounds, going back to his love of guitar and a childhood spent experimenting with pedals.
His work includes scoring Academy Award and BAFTA nominated feature documentary VIRUNGA, directed by Orlando von Einsiedel and executive produced by Leonardo Di Caprio. The film’s music was picked out as one of the “15 Best Film Scores of 2014” by Uproxx.
More recently he wrote the music for Academy Award winning Netflix Short Documentary THE WHITE HELMETS for which he was nominated for a Primetime Emmy for Outstanding Music Composition for a Limited Series, Movie or Special.
Other credits include BBC Three Drama FIVE BY FIVE starring Idris Elba and acclaimed documentary FRAME BY FRAME for which he was nominated for ‘Best Documentary Score’ at the Hollywood Music in Media Awards 2015.
His latest film ON HER SHOULDERS directed by Alexandria Bombach premiered at Sundance 2018 to critical acclaim where it won the documentary award for Best Director. The film will be released theatrically later this year by Oscilloscope.
Most recently, Patrick composed additional music for the record-breaking TNT/Netflix television series THE ALIENIST starring Daniel Bruhl, Luke Evans and Dakota Fanning. As well as recently finishing co-composing the upcoming BBC2/Netflix series BLACK EARTH RISING, an 8-part series starring Michaela Coel and John Goodman.